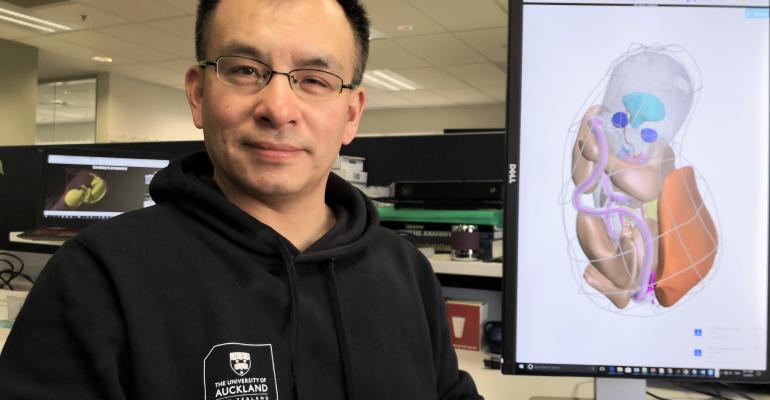 Womb with a view

Contact Harvey Ho to express your interest in his project

Making technology that works for its intended community can be challenging.

Harvey’s online computer model of an almost full-term baby inside its mum can be manipulated in 3D and turned around and upside down, allowing the baby to be viewed from all directions. All of the youngster’s important physical features, such as heart, liver, lungs, limbs and brain hemispheres can be added or removed to support health workers as they explain the effects of smoking on each part of the baby’s anatomy in turn.

Along with the 3D model, a chart shows how long carboxyhaemoglobin (HbCO) stays in both the mother’s blood, and the baby’s blood after a cigarette has been smoked. HbCO forms in the red blood cells when the haemoglobin they carry comes into contact with carbon monoxide. Haemoglobin’s job is to carry oxygen in the blood, but it’s about 200 times more attracted to carbon monoxide than oxygen. Even small amounts of carbon monoxide hinders the flow of oxygen through the body.

Harvey says that around 17 hours after smoking a cigarette there is actually more HbCo in the baby’s blood than the mother’s.

Harvey says an online 3D model that doesn’t require an app, or any special software, could be used by a range of health workers, such as obstetricians, midwives, and Māori health workers to help expectant mothers learn about their own and their baby’s physiological responses to tobacco smoke.

“Smoking is a highly addictive behaviour maintained by biological, psychosocial and cultural factors. Our thought is that viewing and understanding the effects of smoking on their developing baby will strengthen a woman’s motivation to quit,” Harvey says.

The team has developed an initial computer model and have collected feedback about the software from Māori health workers and leaders using focus groups and surveys.

He says the team has taken many learnings from this stage of the work, which will be incorporated into the model.

“We learned some practical things, like there was concern that the model wasn’t wearing any clothes, and that we were talking about a foetus instead of a baby. There were also too many other academic words. But the biggest thing we learned was that it takes a lot of time and trust-building to create something that will work well for the community. They said they would have preferred that we involved them right at the beginning and had a co-design approach.”

He says the team have taken that rich and constructive feedback, and will continue to incorporate it into the model, including showing what happens in the mother’s body when she smokes, as well as the baby’s.

“There’s a lot of very interesting data available. Even many hours after the mother has had her last cigarette for the day, the level of Nicotine in the baby can be 15 percent higher than it is in her blood. I’m sure not many pregnant women have very been told that.

“There are a lot of differences between how the mother’s body handles toxins and how the baby’s does. We know that the baby doesn’t have the developed enzymes to be able to metabolise nicotine, even though the mother can.”

“We know that the baby doesn't have the developed enzymes to metabolise nicotine, even though the mother can.”

Harvey says the next step for his research is to continue to advance model’s detail, align it more closely to the needs of the community, and to work on another detailed 3D model of embryos developed from the data held at the University of Kyoto’s huge collection of human embryo MRI imaging.

The team’s research has also attracted attention from research groups in other universities and hospitals. A future step will be to work with these groups to show the effects of second-hand smoke on unborn babies.

“This is research that combines psychology, science, pharmacology, government policy and software engineering, so it’s been fascinating, but very complicated as well. We’ve learned a lot from the progress so far though, and we look forward to developing the work further.”

Top image: Work is also under way on 3D modelling of data held at the University of Kyoto's human embryo MRI imaging collection.