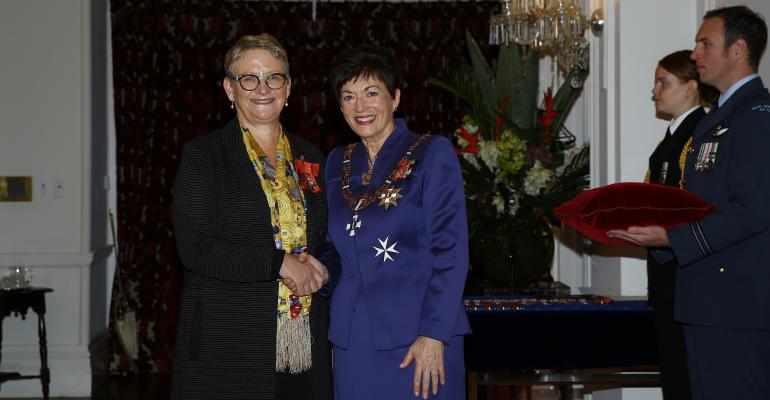 Contact Professor Sally Davenport to express your interest in her project

We know Sally as the Director of the SfTI Challenge, however she has many more strings to her bow.

Sally’s extensive career began simply by enjoying science class at school.  From there, she went to Victoria University and later studied for her PhD in Nuclear Magnetic resonance in Gracefield’s C Block, (then DSIR) where the SfTI Programme Office is based today.

Sally, how did science become your chosen career path?

I loved science and maths classes at school, and from there I went straight to university and studied maths, physics and chemistry. I switched my major to chemistry because I really enjoyed the labs!  Initially I thought I was going to be a chemistry teacher, but then decided to stay on and do my PhD. At one point I joked to one of my professors that his life looked pretty cruisy. He missed the irony and made contact with his colleagues at Oxford University – and voila! Suddenly I was ‘amongst the spires’ on a postdoctoral fellowship for a year.

My second postdoctoral fellowship fell through due to a lack of funding, so I took my training in some very basic computer skills and worked in consulting firms. During the five years living and working in various roles, my now husband and I travelled by campervan through Europe, then in 1990 we went overland through Africa for 6 months and returned to New Zealand via Asia. In 1991 I secured a job at Victoria University who were looking for someone to span the chemistry and management departments and teach about innovation. At the time I didn’t know what the word meant, but luckily for me that combination of a Chemistry PhD and consulting experience meant I was the most suitable candidate!

As for SfTI, that opportunity was born decades earlier when I met Paul Callaghan during my PhD studies. When he was the inaugural Director of the MacDiarmid Institute, he brought Urs Daellenbach and me in to study the CoRE as a new form of science collaboration. There I met some other key players including Professor Richard Blaikie, also a former Director of the MacDiarmid Institute and Professor Shaun Hendy, who is now the Director of Te Punaha Matatini. They were involved in initial discussions about SfTI and asked me to be involved in tiny wee innovation project with 4 people to study SfTI, in much the same way as we had studied the MacDiarmid Institute. However, the original proposal got pushed back by the MBIE science panel who said should be more about enhancing capacity (central to our mission) – and suggested that the “Building NZ’s Innovation Capacity” project should be given more prominence; hence Spearhead 1 grew.

We know you as SfTI’s Director, but tell us about your “other” roles such as at Victoria University and the Productivity Commission?

My SfTI Directorship is half time, and in addition to that I have four PhD students that I co-supervise, but I’m no longer active in teaching.

The other half of my time is a secondment as one of three Commissioners at the NZ Productivity Commission, an independent Crown entity that conducts inquiries and carries out research to expand knowledge about productivity for well-being. I can often be seen walking up and down Lambton Quay between my two offices. Most of the time I manage to balance my roles, except when both are really busy! In addition, I’m a Principal Investigator with Te Punaha Matatini, and an Emeritus Investigator with the MacDiarmid Institute. Yes, I know that adds up to more than 100%!

What do you see as New Zealand’s unique qualities and strengths in the science community?

I think the quality of our science education is really strong – it’s up there with rest of the world, as I quickly realised when I went to Oxford.  We are quite small so the push into inter-disciplinary research is, I suspect, more manageable than in other larger research systems. We also fit in with the New Zealand ethos of giving things a go and getting on with it, which I think is a real strength in a country the size of ours. As Rutherford apparently said, “we’ve got no money, so we’ve got to think”. Mind you he also supposedly said “all science is either physics or stamp collecting” which I don’t agree with! An issue I don’t think our system has resolved yet, is the intensely competitive research system we have which doesn’t exactly foster collaboration, especially at the institutional level. I like to think that the CoREs and NSCs are an excellent mechanism for getting around that, and we have taken that to heart in SfTI.

What do you think is the most exciting part of SfTI and what do you enjoy most?

I am a born optimist and the great thing about working in science and technology is that it is an optimistic space – we are all trying to make things better – our technology, or lives, our society. We do have to be careful that we don’t succumb to the “Innovation Bias” though – that all tech is worthwhile – not everyone shares that view. I think the most exciting part about being Director of SfTI is that we have been delegated the opportunity to experiment with what ‘Mission-Led” research means. That is, to innovate with the way we manage research processes and form inter-disciplinary teams - we have the flexibility to do this in ways that a government agency probably doesn’t.

What I find really exciting is our process of working early with industry and Māori to decide on our high-level missions, then going through a joint mission design process with everyone still in the room. It’s about bringing capability to the table to form something new, not current projects. Most of the research community seems keen to step up and try out this early engagement with industry and Māori (especially with the Federation of Māori Authorities) and it seems to be working. As our Māori business researchers are finding, our work with Māori in the innovation space is world leading for inclusive innovation with first nations people.

The other unique characteristic of SfTI is our capacity development approach – we are as interested in our researchers’ human and relational capacity (ability to work with others to being benefit to NZ) as their technical capacity. Our support for such initiatives is helping to build a real sense of community. You don’t “finish” a SFTI project until it has had the desired impact.

Can you tell us about what being SfTI’s Director involves?

I joke that I have to re-write some of my publications now that I am actually doing the research management rather than just studying it!! That’s not really true, but I certainly am taking a lot of learnings from my own research into SfTI. For example, one of the key articles we wrote from our study of the MacDiarmid Institute for Sir Paul was about the mechanisms that are needed to make people from across many different disciplines and institutions distributed through New Zealand, to ensure they feel like one team. How do you build a “sense of belonging” with something virtual like SfTI – it’s a bit like building a following for a football team? I am still learning about that.

So the job changes on a daily basis – and that is part of the fun!  It’s certainly not boring.  Working with our Management Team and Programme Office based at Callaghan Innovation (CI), building on our trials and successes, making decisions about what we might try next.  We now have some good processes and structures in place as we’ve been going for a few years. Tranche 2 is the time to step this up.  We have a large and diverse Management Team who are very committed to what we are doing, even if they are only 0.2FTE! And we also want to work more closely with CI so that each organisation can make the most of our respective places in the innovation system.

What else interests you outside the world of science?

We have two grown up kids – 23 and 19, which has kept us busy. Both have gone into science! My son did geophysics and GIS and is about to start in the work-force. My daughter is studying Biomedicine at U. Melbourne, so we are getting used to empty nesting too!

We have a beach house at Waitarere where we love spending time with family and friends.  I personally love reading, cooking and going to concerts and (foodie) events, now that we don’t have kids at home. And I think I am quite well known for my love of travel, which I am fortunate enough to be able to do pretty regularly in this line of work!