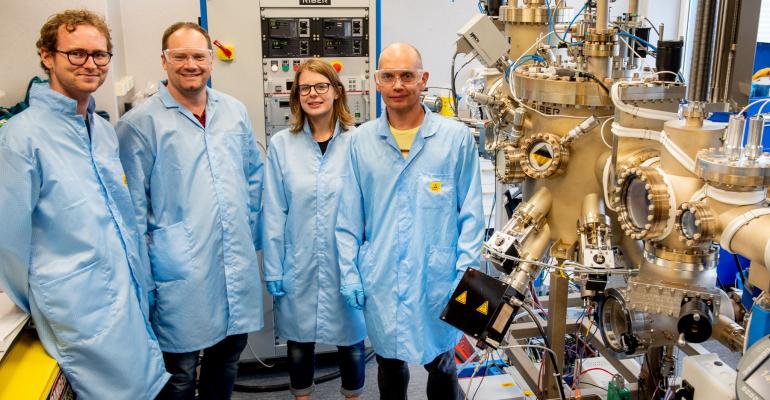 Contact Simon Granville to express your interest in his project

Your computer takes time to boot up from cold because the hundreds of billions of transistors it contains are all busy asking the CPU what state they were in when the computer was shut down.

Transistors can either be on or off, which programmers know as a 1 (usually on), or a 0 (usually off). If you switch the power off, transistors immediately forget which state they were in, which is why huge data companies like Google, Amazon, and Apple currently chew up about 6 to 8 percent of all the world’s electricity keeping their big data centres powered up. It’s been said that in its heyday, Bitcoin was using the same amount of power as it took to run the whole of New Zealand.

A SfTI team is leading the world in the advancement of a new kind of transistor that uses magnetism to remember what state it was in when it was turned off. The idea for this type of field-effect transistor, known as a spinFET, has been around since the 1990s, but no one around the world has been able to make it work. SfTI researchers, Dr Simon Granville and Associate Professor Ben Ruck from Victoria University Wellington think they know how and are using SfTI seed funding to complete a proof of concept.

The project aims to demonstrate that a spinFET made from special magnetic materials developed in New Zealand could be just the breakthrough needed to make computing much more energy-efficient.

...special magnetic materials developed in New Zealand could be just the breakthrough needed...

“For a standard transistor, imagine a flat pad with an electrical contact at either end. If a current’s able to flow from the first contact to the second, the transistor is in one state and if a current can't flow, it’s in another state – but if you turn the power off, it’ll immediately forget which state it was in,” Simon says.

“The new concept is to incorporate magnetic materials into the transistor, because magnets stay magnetised in a particular direction, regardless of whether there’s any current. They ‘remember’ their polarisation pretty much indefinitely, or at least much longer than the lifetime of a computer.

The SfTI project is aiming to be the first to successfully show the presence of a strongly spin-polarised current in a field-effect transistor.

...the first to successfully show the presence of a strongly spin-polarised current in a field-effect transistor.

Which is where the SfTI project team come in.  Ben and Simon have been working with rare earth nitrides, some of which turned out to be magnetic semiconductors.  By growing the rare earth nitrides as very thin films, the team can get the right balance of magnetism and conductivity that will match with other semiconductor materials in the transistor and won’t change the spin polarisation of the electrical current as it passes through.

“It’s very tricky to grow films of these rare earth nitrides to allow us to look for a spin-polarised current through a semiconductor layer,” Simon says.

There is another big problem facing the team. The rare earth nitrides are only magnetic at about minus 200 degrees Celsius.

...rare earth nitrides are only magnetic at about minus 200 degrees Celsius.

“It might not be a deal breaker for the big data centres that have to temperature-control their computer clusters anyway, but there’s an almost unlimited combination of magnetic and semiconducting elements possible, so perhaps if we can prove magnetic semiconductors will be useful for spinFETs, there’ll be an explosion of research that can help bring the operation closer to room temperature.”

The other issue is that transistors for computers are tiny – about ten nanometres. The smallest component on your computer probably contains billions of them.

“If a millimetre was the size of a truck, ten nanometers would be about the width of a human hair, so they’re small and have to be looked at with electron microscopes,” Simon says.

“There’s a lot yet to be proven, but it’s exciting and potentially very meaningful science. The energy drain from the demand for conventional transistors is constantly on the increase. You can take steps to reduce energy consumption any other way you want, but unless you deal with power-hungry electronics somehow, you’ll never get close to the conservation effect a potential solution like this could have.”