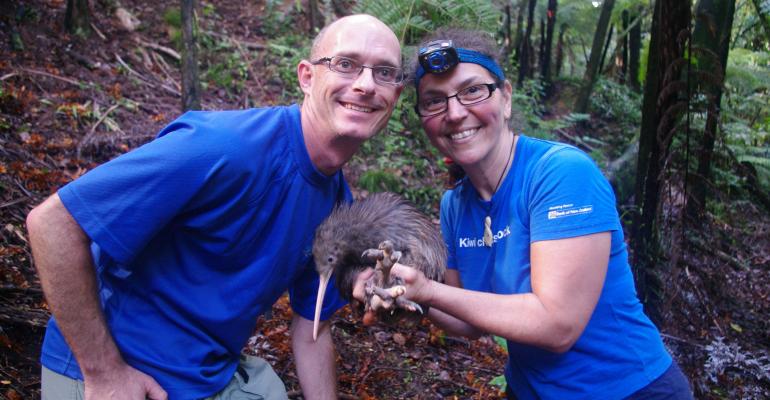 Who’s in our forests?

Contact Stephen Marsland to express your interest in his project

How do you monitor the numbers of native birds in our forests when the tui and bellbirds are imitating each other and the trill sounds of the ruru (moreporks) sound just like kiwi?

SfTI seed researcher, Professor Stephen Marsland (Victoria, University of Wellington) and his team have come up with computer software that can analyse sound recordings of the goings on within native bush and deduce the abundance of various types of birds there.

The software analyses spectrogram recordings of bush sounds and can learn the sound wave patterns that represent each bird call, and can count them a lot faster than a human observer.

Stephen says the software is more accurate than the average, untrained person.

“...the software is more accurate than the average, untrained person.”

“It’s not as good as an expert human who’s concentrating hard at discerning the different calls, but in any 8-hour recording, most of it is nothing, with no calls at all, and it’s pretty hard for a human to maintain their concentration listening to that.

“But the software doesn’t care, and it’s very fast. A 15-minute recording takes it about a minute to process.”

The team has been working for about four years on perfecting the software, which uses complex mathematics to analyse the spectrogram recordings, and give estimates of the species of birds and the frequency of their calls within a given area.

Battery operated recorders are positioned in the bush and left running for around a week, or until the batteries run out. The data is then uploaded to the software, which filters the bush sounds for the species of interest.

Stephen says the team are now working on being able to tell the direction and distance of the calls from the recorders, and even identifying individuals.

“We can’t yet tell if the 50 calls are from 5 birds making 10 calls each or 50 birds each calling once, but we are moving toward that.”

Bringing them closer to these goals is SfTI funding, which has enabled the team to develop a different recorder that uses multiple microphones to mathematically auto-correlate the direction the sounds are coming from, and their distance from the microphones.

“If you can work out where the calls are coming from, you can start to establish how many birds are doing the talking,” Stephen says.

“...you can start to establish how many birds are doing the talking.”

The team have built a prototype recorder that can successfully estimate the direction of calls but have found estimating the distance from the recorder to be more difficult.

“There are a lot of variables that make a big difference to the estimate of distance, like which way the bird is facing. If they’re facing the microphone, the call is louder, and they sound closer.”

Another influence is the wind, which can move the sound waves.

Stephen says the range of a single microphone can be very good for certain species.

“A kiwi’s call is pretty loud, so they can be picked up even about 400 metres away.”

The distance and direction aspect of the project is world-leading, and Stephen says potentially a boon for conservation.

“It would allow us to monitor the health of bird populations without affecting their behaviours.”

The technology also has other potential uses, such as monitoring pests and predators.

“By changing the type of recorders you use, you could monitor for predator species like rats and stoats that communicate in frequencies that are out of the range of human hearing. It could be an excellent way to gauge the predator stress on a particular area. You’re limited only by the number of microphones in operation.”

Other predators that make loud sounds within the range of human hearing, such as possums could be even easier to monitor.

“The software can be trained to detect any sound. As long as you’ve got more than one predator, they’re talking to each other and the microphone is close enough, it’ll be able to detect them. We’ve already succeeded in training the software to detect two types of native bats, which are completely inaudible to humans.”

Stephen’s impetus for this work comes from his long-standing passion for conservation. He’s an accredited kiwi handler and has spent many a night in the bush watching and listening to the birds.

So do birds talk to each other?

“So do birds talk to each other?”

“I’m reasonably sure they are saying something. Now we just need to understand what it is.”